5 Python specialists who inspire us!

Python is a programming language used by big names in web. Its flexibility, speed, scalability and its excellent performances have seduced many startups which have become today essential names in the web sector. We have listed 5 Python specialists who inspire us and make us want to develop in Python every day!

Launched in 2010, the website Pinterest was initially 100% developed in Python. It was the programming language they knew best. Python allowed to build the project block by block by adding then modifying each of them without redeveloping anything.

Then, research has been the first element to be redeveloped in Java. Today Pinterest is mainly coded in Java and also uses Go.

However, thanks to the speed of developing with Python, the project born during summer 2009 emerged in Beta version in March 2010.
Ben Silbermann noticed that his application Tote was used to pin pictures and quickly developed Pinterest, an application dedicated to this use.

Initially developed with Lips in 2005, Reddit was redeveloped into Python afterwards. The familiarisation with this language and its speed of development have been decisive in the choice for programming language. Steve Huffman, co-founder and current CEO revealed the two main reasons that led him to make this decision and especially why Python is still used from that moment.

The first reason is the existence of libraries for everything. For him, these Python libraries are also sources of learning. In the same way that when you don’t succeed in doing something, you ask someone until you can do it yourself; Python libraries enable to observe in order to learn how to code by yourself.

The second reason is the clarity of the Python Code which is easier to write. He even says: “Everything you write has to be in Python so that I can read it”. Its simple and easy to read structure is the main reason why Python language is still used at Reddit.

The team of the Swedish software developed in 2006 is a Python specialist and very active in the Pythonists community. Python is used in the backend service, which gathers several independent services and for the data analysis service. These services are fully satisfied to develop with Python which has been favoured for its speed since this is an important point at Spotify. The other services work with Java and sometimes with C or C++.

Python developers at Spotify use libraries a lot for calculations and contribute to open source projects as they develop their own libraries that are made available on GitHub. Luigi, Python library developed by Spotify and made available to the community, enables for example the system to recommend people to follow and create Top lists.

Spotify sponsors famous events as EuroPython, hackathons and gave a conference at PyCon Finland in 2011.

The video hosting website we do not introduce anymore was created in February 2005. Python is combined today to C, C++, Java and Go but remains at the core of the functionalities of Youtube.  Speed of development with Python allows to implement new ideas faster and to cope with change quicker. That’s what seduced Youtube. The Python programming language will not disappear soon from the platform since Google, which redeemed Youtube in October 2006 is, with Intel, one of the two most important sponsors of PyCon. Python is also recognized as official language by Google.

Besides, creator of Python, Guido Van Rossum, has worked at Google from 2005 to 2012, before joining the number 1 of Python specialists inspiring us…

After having created Python in 1991 and worked at Google, Guido Van Rossum joined Dropbox January the 1st in 2013. While constituting the best team, Dropbox wanted the greatest Python expert to be by their side. Indeed, who better than the founder of the programming language himself could have developed their storage service?

Dropbox is just like Spotify, a Python specialist which contributes to open sources projects. For example, their library Pyston is a compiler for Python programming language available for download on GitHub.

And many other Python specialists!

Mozilla, NASA … and many others have also chosen to develop with Python. Our web agency in Lyon, Askin, also chose to become a specialist in Python development in Lyon.

To find out more, you can read our article: “why did Askin choose to become an expert in Python development?”. 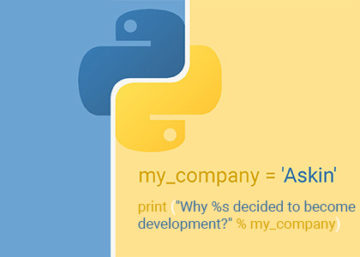 Python is a far more old programming language than Java, that got its name from...